In keeping with its meteoric rise through the ranks, Windsor Brass has notched up another Victory at the Nambour Contest, held October 29 & 30.

Having been regraded from C Grade to B Grade only recently, Windsor Brass won the B grade section of the competition with Dale Hosking as MD. The band came first in the Concert Program and had to settle for second place in the Hymn Tune by the narrowest of margins. Overall, Windsor Brass ended 3 points ahead of the nearest rival, Bundaberg, thereby clinching the B Grade title.

Also successful on the weekend was the Windsor Brass Quintet consisting of Mark Nettle, Cathy Spratt, Ros Shaw, Allen Clark and Daniel Allen, narrowly beating the contigent from XLCR – who will no doubt be reminded of this for quite some time! 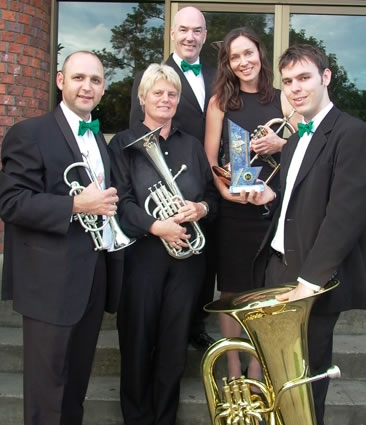 Along with soloists from Windsor Brass, several soloists from Brisbane Excelsior also competed in the contest even though the band did not compete.