The weekend began with an Excelsior domination of the solo events. In the Senior section, our members won the Soprano section (Dale Hosking), Flugel Horn (Amanda Casagrande), Tenor Horn (Imelda Moore from Brisbane Brass on permit but who is now a member!), Baritone (Brad Hosking), Eb Tuba (Mark Wheeler from Cairns Brass on permit!), Bb Tuba (Rick Casagrande), and in the Junior Cornet – Zaac Latter. In all, our two bands had 19 soloists entered. Mark Beilby, our accompanist for the day, was counted as performing 24 times!!

Howard Taylor was once again sensational in his leadership of Brisbane Excelsior and Windsor Brass over the weekend.

Windsor Brass were ecstatic with their wins in every section of the D Grade Competition held in Maryborough on the 12-13 June, 2004. Jeff Herbert, the principle cornet for Windsor Brass, had an outstanding weekend. Not only did he lead the band to success, at 77 years of age, Jeff also performed twice in the solo events on the weekend. 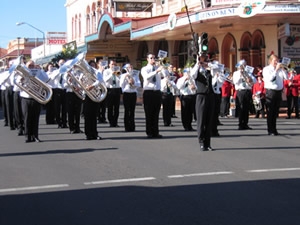 They showed themselves to be the best not only on stage, but also on Parade as seen here – led by Cathy Spratt-Bulloch.

Brisbane Excelsior Band has returned home from the Australian National Championships in Launceston held over the Easter Weekend.

We can also claim to be the highest placed Australian Marching Champion for the 2nd year running.

Brisbane Excelsior on the Street March

Our soloists performed extremely well with ten of our players entered. Ashley Gittins won the National Euphonium Championship whilst Katrina Marzella, who was playing with XLCR whilst on a University exchange from Scotland, won the National Baritone Championship. The entire eupho/baritone section and three out of our 4 tuba players competed. Apart from Katrina and Ashley, others to perform were Julie Woods, Allan Lonergan, Rick Casagrande, Stephen Pell, Brad Hosking, Brenden Wheeler, Bernard Denlay and Dale Hosking.

Brisbane Excelsior followed up their win at home in the Qld State Championships in 2003 to also win the NSW title.

XLCR, led by Howard Taylor, played Paganini Variations as their Own Choice with Devil and the Deep Blue Sea as the set Test Selection. 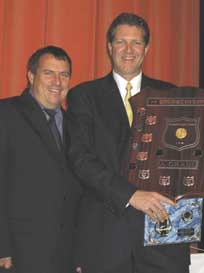 The win in Maryborough 2003 made it 2 in a row for XLCR having won the State title the previous year in Gladstone.

XLCR Celebrate their first victory under the baton of Howard Taylor – the beginning of an incredible partnership.

Pictures from Contesting in Previous Years