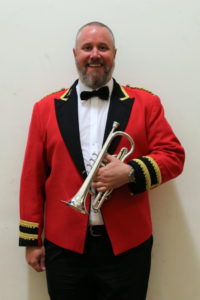 Scott began his cornet career at the age of 9 under the tutorage of his grandfather joining the Rockhampton City Brass Band.  In 1998 Scott moved to Toowoomba where he studied a Bachelor of Music at the University of Southern Queensland whilst also becoming a member of the Toowoomba Municipal Band and the Brisbane Excelsior Band.  In 2000, Scott moved to Brisbane where he was the director of Australian Brass Repairs and Sales Specialists and taught Instrumental music in several Brisbane schools.

In 2002 Scott joined the Queensland Police Service where he remains employed and has maintained his membership of Brisbane Excelsior.  Highlights for Scott in his career include touring to Hong Kong in 2005, Competing at the British Open contest in 2009 and enjoying multiple Australian and New Zealand national title wins with the band.  Scott is the current Drum Major of XLCR taking the band to Champion Australian marching band in 2010 and runner-up in the recent 2017, 2018 and 2019 National Championships.