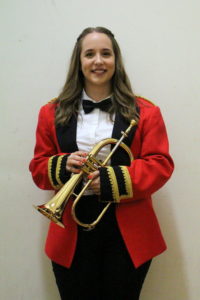 amaryn Heck, born in Ipswich, Australia, started learning the piano at the age of five. As her passion for brass instruments developed, Tamaryn started learning the trumpet at eight years of age under the tutelage of Dale Richardson. Tamaryn completed a Bachelor of Music degree at the Queensland Conservatorium of Music in 2015, studying Classical Music Performance under the co-principal trumpets of the Queensland Symphony Orchestra, Sarah Butler and Richard Madden. Upon commencing her studies, she has focused her time pursuing her keen interest in music by actively involving herself in several orchestras and ensembles, as well as teaching instrumental music in the Brisbane and Ipswich areas. In 2017, Tamaryn made her contest debut at the New Zealand National Championships, where she won the ‘Best Soloist in the Test Piece’ prize.