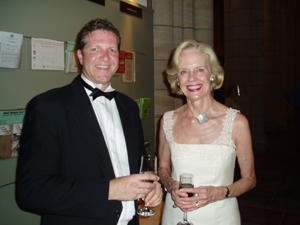 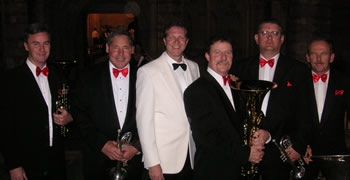 Visitors from Sydney and New Zealand with Howard Taylor

The Concert was held in the magnificent St John’s Cathedral with proceeds going towards the completion of the building, this beautiful structure is based on the Truro Cathedral in Cornwall UK.

It was with some trepidation that I attended Brisbane Excelsior’s Cathedral Brass concert, with temperatures still in the high 30 degrees when the concert commenced. As a result the building was extremely hot and humidity was high.

However my fears were soon dispelled with the opening numbers from “Brassed Off” sounding balanced and tuneful. Amanda Casagrande’s rendition of Concerto de Aranjuez was beautifully executed, with clear articulation and a lovely mellow tone.

A haunting version of Londonderry Air, with the euphoniums carrying the melody line, was enhanced by the use of miner’s helmets, lights beaming in the darkness.

A perennial favourite, Cornet Carillon, displayed balanced bell-like cornet playing, with the sounds well suited to the echoing acoustics of the cathedral.

Laudate Dominum was generally well played, however the cornets were over powered at times. The acoustics of the church made it difficult for the basses to articulate their faster moving sections. The work finished with a very majestic climax.

A highlight of the night, and again a well-chosen piece for the venue, was Howard Snell’s arrangement of Arioso. A very controlled and tuneful eupho/baritone section really milked the moment. Great playing team!

Virtuoso euphonium player, Riki McDonnell, wowed the audience with Pokarekareana, followed by Let Me Try Again. Riki displayed his usual mellow rich sound and highly controlled playing. Riki teamed up with Australian Eupho champion, Ashley Gittins, to perform the famous duet Deep Inside the Sacred Temple. Unfortunately this was not as balanced as it should have been, but still a deeply moving performance.

Another highlight of the night was the Finale from Saint-Saens Symphony No. 3. Rich sonorous sounds, clear cornet work and fine organ playing by Christopher Cook, combined to create a majestic and powerful, finely played work.

Due to the cathedral’s acoustics, some of the faster moving cornet and bass sections were lost, however this was not to the detriment of the concert.

In the presence of The Governor of Queensland, the Archbishop and the Dean of the Cathedral the large congregation gave the band a standing ovation after their final number.

The trip over from New Zealand to hear the band was well worth it.

Howard Taylor has worked his magic with Brisbane Excelsior. The band was well rehearsed, had few tuning problems and a mellow warm tone.