Windsor Brass ventured north to the historic banding city of Maryborough to represent the Brisbane Excelsior Organisation at this years Best of Brass.

Windsor Brass, for the second year, were asked to perform in the Best of Brass concert on Saturday evening. The following is an extract from the 4barsrest Downunder review:

The James Bond Theme is Windsor Brass’s first offering, complete with footage of 007 in Casino Royale on the big screen. This is followed smoothly by Ashley Gittins with the euphonium solo The Holy Well theme from Peter Graham’s On Alderley Edge. The audience is silent as he plays this beautiful melody (all the while looking right at the audience, sharing each note with us) taking in the lyrical phrasing. There are a few moments where the band isn’t quite with the soloist, but Mr Taylor soon brings it all back together. How can two opening pieces bring such variety of style, dynamics and emotions?  Moulin Rouge’s Diamonds are a Girl’s Best Friend is next, again with video footage used to great effect. Another change of pace sees Guest vocalist Rhian McDonnell introduced to sing Somewhere Out There.

Sadly, Rhian’s beautiful rich voice wasn’t as well supported by the accompaniment as she deserved, with frequent intonation problems and wrong notes creeping in to mar an otherwise lovely performance.

Ashley and his ‘Eupho’ return to play the classic Grandfather’s Clock – with a difference. Just as the band commences the introduction, two other players walk out with a trombone and a Flugel and place these at his feet. He hams it up, acting surprised and deliberating over which one to use. He has the audience in the palm of his hand, wondering what will come next. Opening theme and variation one are on the trombone, followed by variation two on the Eupho and a cadenza featuring some amazing multi-phonics. He then picks up the Flugel for a prestissimo final variation before ending on Eupho for the coda, soaring to a high ‘G’ to finish. Whole minutes of applause follow, with a display of appreciation requiring a curtain call!

A sober moment occurs then, as Howard Taylor gives the sad news that Waratah Band (Newcastle) has lost their entire library in the storm and flood that has hit NSW this weekend. He asks for people to consider giving any assistance possible and that the Waratah bandsmen and women be in our thoughts.

Windsor’s final item is Joshua Fit the Battle of Jericho – an innovative arrangement with Ashley back as Narrator. A mixture of Majestic battle themes and swung style narrative over simple riffs tells this famous Bible story.

There’s plenty of comedy as the narrator gets a bit over excited and then upsets Adrian Dadds by interrupting an impromptu drum solo with ‘hey, little drummer boy, knock it off!’ The band gets right into the mood of things and march, shout and chant their way through the story.

Is there anything this band cannot do? We’ve seen beautiful serious playing and singing and now this dramatic presentation.

Windsor Brass also excelled the next day in the Street March and on stage. 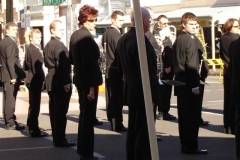 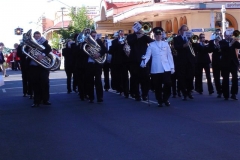 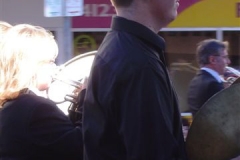 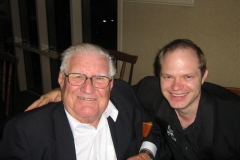 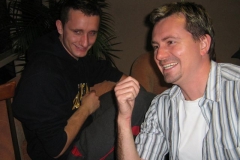 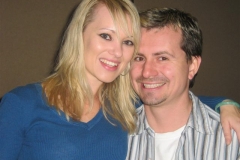