(Concert review as it appears on 4barsrest)

It has been good to see the return of “Stars of Brass”, which will hopefully continue to be an annual event in Brisbane concert calendar.  With just over half the capacity of the Queensland Conservatorium Theatre filled, we hope that the event will also increase in its following as it continues to establish its reputation for excellence in brass playing.  With the inclusion of soloists from the UK, USA and Australia, the “Stars of Brass” could potentially find itself gaining as much prestige as the “Melbourne Festival of Brass”. Time will tell.

Throughout the evening, the Brisbane Excelsior (XLCR) provided some sympathetic accompaniment for the soloists featured.  As a feature on their own they provided some very fine ensemble playing, with some great blends of sound, and rhythmic drive.  More importantly for an occasion such as this, they provided the audience with an entertaining evening, along with the featured soloists.

After a nice punchy start with J.J. Richards, The Waltonian, the band was joined by Russell Gray for his rendition of Levy’s, Grand Russian Fantasia.  With a warm, relaxed sound, backed with an attractive vibrato and some impressive fluency- particularly in the last variation, Russell provided us with a highly stylistic and entertaining rendition of this old favourite of the cornet repertoire.

Russell Gray plants his feet firmly on the ground

Following this was Drover’s arrangement of, Here’s That Rainy Day, which allowed Excelsior to display their fine sense of balance and phrasing, and which was well suited to the acoustics of the theatre.

Devil’s Duel – a composition based upon the theme of Paganini’s twenty-fourth caprice, and written by Peter Meecham, provided us with the opportunity experience Black Dyke’s principal euphonium, David Thornton.  David’s playing was technically assured, displaying some fine delicate playing which he made sound easy.  Only occasionally was his articulation a little unclear, which was sometimes overshadowed by some of Excelsior’s dynamics.  Despite this, we were treated to a fine rendition, by the soloist and the band, of this interesting work.

Peter Luff, who is the Head of Brass at the Queensland Conservatorium, gave us a performance of Langford’s arrangement of, Lark in the Clear Air (It should be pointed out that Peter, who as a French hornist should be more allergic to brass bands than he is, has been an important figure in the formation of the brass band course at the Queensland Conservatorium of Music – the first of its type in Australia).  Displaying a fine sense of phrasing, Peter provided us with a warm, flowing, and relaxed sound appropriate for this work, which never needed to become brittle to compete with the subdued dynamics and control that Excelsior provided behind him.

The inclusion of Rex Richardson’s, Concerto for Jazz Trumpet, Rhythm Section and Brass Band, was always going to be a challenge for the average banding concert goer. With its Australian premier at the “Melbourne International Festival of Brass” last year, this work would appeal to admirers of Stan Kenton’s experimental arranger- Bob Graettinger (City of Glass), and serial composer Rolf Liebermann (Concerto for Jazz Band and Orchestra). In other words: quite a way from the usual content included in a brass band concert.

However, with the support of Rex’s fine technique, musicality and showmanship, this work was successfully presented, and enthusiastically received, by those present.  With considerable ease Rex moved from Bb trumpet, to flugelhorn and piccolo trumpet, whilst retaining a warmth and depth of sound in all registers.  Regardless of what instrument was in his hands, you knew that it was Rex Richardson that you were listening to.

To take us to the interval, Excelsior’s performance of Smith’s arrangement of, Stingray, gave us a little more gusto than was probably necessary for an indoor gig!

XLCR during the afternoon rehearsal and set-up phase.  The concert was professionally recorded by Brad Hosking from Vivace Recordings.

Coming back from the interval, the band was joined by both Russell Gray and the didgeridoo soloist – Stephen Bond. For the start of this work, the stage was darkened and flooded with smoke, with the lights slowly coming up with Stephen’s resonant drone, which eventually underpinned a moody flugelhorn solo from Russell.  The work, Future Dreams, which is an original composition by Bill Broughton, went straight from this brooding and moody start straight to more jazz based second section. I must confess that this segue from one style to the other didn’t quite work for me, but the work should nevertheless be admired for its originality of thought.  This jazz section featured some great interplay between the soloists during their respective solo ‘breaks’- something you wouldn’t expect to say about these two very different instruments, let alone in a jazz setting!

Rex Richardson returned to stage next, to again to be featured on trumpet, flugelhorn, and piccolo trumpet, in a performance of Allen Vizzutti’s, Rising Sun.  Vizzutti, known as a trumpet soloist in his own right, is also known for his challenging compositions and studies for the instrument.  Rex showed some wonderful confidence, flowing phrasing, technical brilliance, and marvelous musicality throughout, demonstrating the he is not only comfortable in the jazz and classical genres, but that he is a master of both. His blistering final cadenza, which saw him moving non stop through all of the trumpet’s registers with great agility, was also backed up by some very impressive circular breathing whilst doing all of this.

Providing us with a moment of repose, Bosanko’s, In This Quiet Moment, was Excelsior’s choice of hymn for their winning performances at the recent national band competition.  The band displayed some excellent phrasing and blend, with some lovely moments from the flugelhorn and principal cornet.

Throughout the evening Sean Crowther was given to moments of frustration, as he would head for the front of the stage to be featured as a soloist, only to be informed by the concert’s host, Rick Casagrande, that it wasn’t his turn, and that he should (reluctantly) return to the back of the band where he belonged. Finally, after half of the concert almost over, Sean was given the opportunity to perform Sykes’ arrangement of, Czardas, by Monti.  Principal bass of Grimethorpe, Sean continued the theatricals throughout this work, but also provided us with deep, lugubrious, start, followed by some very tight – and agile – articulation and technique. 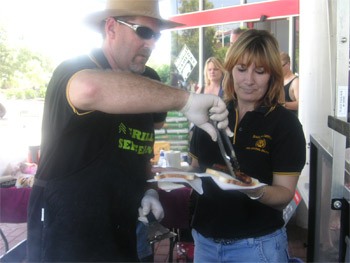 Shaun Crowther demonstrates his abilities as The Cuckoo..oops..in The Cuckoo

Sean was also joined by David Thornton, Riki McDonnell on Euphonium and Dean Morley on Bb Bass, to play James Gourlay’s tuba quartet, Eagle Thunder.  This blues inspired suite afforded us the opportunity to enjoy the fine ensemble playing from this group, and gave  the audience a glimpse of an ensemble that doesn’t get seen enough in band circles within Australia.

The following band feature was Kerwin’s jazz inspired arrangement of, Favourite Things, and I hope that the audience’s toes didn’t curl as much as mine did!  It’s always hard to get a brass band – even a wind band – to swing well, and as much as I would like to see a brass band perform a swing arrangement very successfully, I always find myself feeling disappointed – for the band – once a performance has finished. Despite this, Excelsior’s balance, good dynamics, and general sense of ensemble were well maintained throughout this piece, and the audience appeared to have enjoyed the performance.

Coming back to the stage, David Thornton gave us a fine performance of, There Will Be God, displaying a warm vibrato and a fine singing sound, and finishing on a high Eb at the end of the work, which received an enthusiastic response from the audience.

To finish off this concert, all of the soloists were featured in Graham’s, Call of the Cossacks, starting off with an offstage cadenza from Rex Richardson, and then followed by each soloist coming onstage for their turn to feature. Not satisfied with one performance with which to remember the evening’s soloists, the audience was treated to a second run of this piece, including a fine demonstration by Sean Crowther on how not to play the tuba!  I’m sure that all present would agree that this was a rousing and satisfying end to this very enjoyable concert, which will hopefully be followed up by another performance next year.