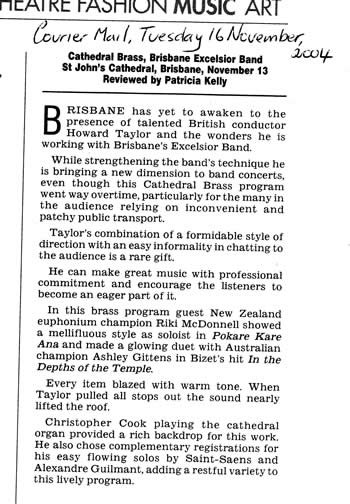 The Dan Carroll Band has announced the release of its new EP “Departure”. So what has this got to do with Brisbane Excelsior?

The disc is called “Departure” by the Dan Carroll Band. You can order it in all good CD Stores nationwide or from www.waterfrontrecords.com (who are very speedy, a 2 day turnaround in most cases) and very soon will be available on ITunes.

This group is good and is one of the emerging groups on the Australian music scene.

The Dan Carroll Band is also a strong contender for the upcoming MusicOz awards. You can show support for the guys and vote for them by following the link from their myspace site www.myspace.com/­dancarrollband. Voters can win a bunch of prizes too.

Also check out 60 minutes on Sunday 14 October. Brad is playing a Charity gig with the Dan Carroll Band and the Casey Barnes band and 60 minutes is covering the story. Its called the Rock For Connor Concert!