The beginnings of the tour took place in the alley way at the Corn Exchange in May 2005. This is the moment when Rick Casagrande negotiated an invitation with event organiser Philip Biggs for Brisbane Excelsior to attend The 2006 All England Masters International Brass Band Championship. 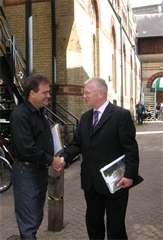 From this moment, there was little doubt that the band would go. With the intense drive and motivational push from our MD, Howard Taylor, the fundraising process was quickly launched. The management committee and individual members worked extremely hard to make the best possible effort to raise the money. Performances, sausage sizzles, chocolate drives, a Trivia Night, Garage Sale, raffles, and producing our second CD were part of the combined effort achieve the daunting target of $140,000. No less than 10 grant submissions and in excess of 300 sponsorship proposals were delivered. All individuals making the tour contributed $1500 each. We have received incredible support from many bands and individuals around Australia, in the form of donations, CD purchases and letters of support. For this, we thank those who found the time and resources to help us in our quest.

Upon returning home, it was a wonderful surprise to find notification of a successful grant submission with Arts Queensland, which supported the concert leg component of our tour. This now leaves the band with a debt of approximately $30,000 – our goal is to have this paid off within 12 months.

Unfortunately, four of our regular players were unable to make the tour due to financial constraints or work commitments. The Masters competition allows for 28 players plus percussion. Fortunately, we were extremely lucky to secure the services of 6 players to make up the numbers. Kev McMorran, Ken Bradley, Therese Curry, Conrad Curry, Riki McDonnell and Alexandra Kerwin were welcomed with open arms. From the first down beat (yes – Howard does have one – most of the time!) at the first rehearsal with a full complement of players on Saturday 20 May, the band ‘clicked’. From here on, we knew this was going to be an experience of a life time.

With all travel arrangements handled by Simon Hocking, we departed Brisbane 830pm Tuesday evening 23 May. Flying with Emirates, 2 stops and 26 hours later we arrived in London and were transferred directly to Norwich which became our ‘home’ for the days leading up to the Masters. Daily rehearsals at the Cawston Band room and comfortable accommodation at the Holiday Inn helped us to settle in. Our first concert in the UK was held in a small historic venue in the city centre of Norwich called the Assembly Rooms. XLCR shared the evening with the Cawston Band – a highlight of the concert being the performance of The Acrobat, played by the Cawston solo trombone with his foot! It was here that we received the first of our standing ovations.

Sunday 28 May, the day of the Masters, was upon us before we knew it. The band was well prepared and focused. Apart from a brief rehearsal where Howard spent his time whispering to us – (why? because his Mum was there!) – everything was running smoothly! A ‘walk through’ the Corn Exchange with Philip Biggs the day before the contest was extremely valuable – at least we knew what the venue looked like before we played in it.

With a draw of 8 out of 21, things were falling into place. Time for breakfast, a bit of a warm up session, photo, and then a leisurely 2 minute stroll from the Crowne Plaza to the warm up room. Conditions were ‘different’. All bands shared a hall prior to their performance where they could blow freely, mingle, look at the display stands, change clothes (!), before being called to the sign up room where silence was strictly enforced, immediately before taking to the stage. Our performance of Paganini Variations had been better. We had been playing consistently well but unfortunately, there were some things which happened on stage which just never happen. Yes we were disappointed with this lack of consistency, but overall, the performance was musical, the dynamic contrasts were effective, and on the whole, technique was well controlled. We are left wondering how the result might have been had we played our best….but how often do you hear that! As they say – that’s contesting. The three, from all accounts, well respected adjudicators, David Read, John Berryman, and Geoffrey Whitham were enclosed in a fully screened ‘box’ and were allowed to confer. We were extremely happy to have been placed tenth. 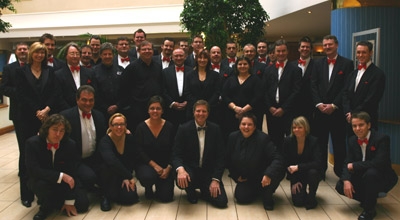 Two rest and recreational days in London were an ideal way move on. We said our goodbyes to Big Kev, and enjoyed the sights of this amazing city. People scattered in all directions – Tower of London, Soho, Musicals, curry’s, pubs, shopping. Everyone was present and accounted for on Wednesday morning ready for the main concert leg of the tour.

For many, the Plymouth concert was the tour highlight. Waiting for us at the Motel was the ubiquitous Jason Katsikaris. It was fantastic to have Jason with us for the rest of the tour. He slotted into the back row perfectly. Ben and Sam enjoyed having him back. The event tonight, organised by the Plymouth Congress Hall Band, was destined to be a momentous occasion! Plymouth is Howard’s home town. Howard’s Mum, sister, brother and family, as well as fellow bandsman and friends turned up to see their ‘boy’ showcase his band! I think poor Steve Ridler cried through the whole concert.

It was also the night for the UK premiere of the The Journey (So Far!) – a piece cleverly written by Trevor Wallbank for his good mate, Steve Ridler.

The hospitality (magnificent cornish pasties and tea!), organisation and audience appreciation was all first class. We were very fortunate to have the opportunity to accompany the golden voice of Alison Harvey. The band played Paganini Variations once more and purged the gremlins that haunted us on the Corn Exchange stage! 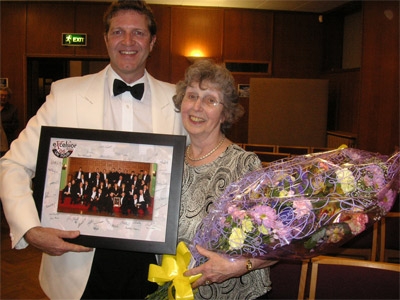 Howard with his Mum, Patricia Taylor

Next stop was Bristol where, the local community choir group, Circuit 16, provided a huge spread of food to feed an army and claimed it to be afternoon tea! The concert that evening was a sellout with an audience of over 800 enthusiastic listeners. The musical director of the choir, Cara, and Howard are old friends and it was great to see the two working together. The band were challenged vocally when we sang our way through Irish Blessing – well…some of us did…!

The BBC recording was certainly an experience. The recording studio was enormous and the professionalism of the whole outfit was somewhat daunting. When we were told by the engineers that our playing was ‘perhaps not good enough…’, Howard’s controlled (mmm….lets pretend it was!) tantrum had, eventually, the desired effect. Not having a kit restricted our program somewhat and having to ditch Valero and All The Things You Are was a little disappointing. Never-the-less, we are all looking forward to hearing the broadcast later in the year on BBC Radio 2 Listen to the Band. 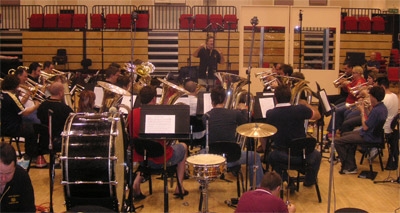 XLCR in the BBC recording studio

With the tour coming to a rapid close, the Manchester concert with reigning UK National Champions, Leyland Band, could be seen as a very suitable climax. The sense of occasion was enormous. To have the opportunity to perform in front of some of the who’s who of brass banding in the world such as Dr Roy Newsome, Martin Ellerby, Goff Richards, Daryl Barry and Nigel Fielding was very special. The performance of Kingdom Triumphant as massed bands in the excellent acoustic and setting of the Manchester Cathedral was memorable to say the least. Mareika and Russell Gray went to extraordinary lengths to help us in our venture and to them we owe a huge amount of thanks.

Catching up with Katrina Marzella was terrific, and of course our own Brenden ‘knob’ Wheeler! How well did he play that night! I can’t possibly forget to mention Brett and Sarah Baker – what a great couple!

A surprise visit to the house of Champion Whistler David Morris (thanks Steve!) in the tiny village of Saddleworth, a stroll through the Dobcross bandroom, and a somewhat crowded and for some ‘trying’ lunch at the Navigation Inn ended our tour on a good note, so to speak!

There was a high level of camaraderie and overall sense of teamwork amongst all who travelled on this tour. Another satisfying aspect was the way in which the younger members of the band performed – both on the stage and off the stage, they were an absolute pleasure to have around and kept us all smiling (most of the time!). For our guests, supporters (Mary, Jenny, Irene and Jeff), Simon and the members of XLCR (that includes you Janet!), I think I can safely say, this tour was a trip of a lifetime.

Was it worth the hard work, the pain, the stress and tension, the time away from family, the tears and the debt?! Most definitely – without a doubt!

Howard reflects on the tour speaking to 4barsrest

Tour highlights and features:
* Paula’s tour website www.xlcrinblighty.com
* Ken Bradley acting as chaperone for the younger players on their ventures ‘out’….upon their return the roles were clearly reversed
* Meeting Howard’s’ Mum
* Alex’s bottom lip shake
* Alex’s forte pianos
* Dooboories
* Brad Hosking’s music – where is it now Brad?
* Trevor Stanley’s skills of finding an empty row of seats on the planes.
* The emotion of Steve Ridler – he cries at everything!
* Ross Moloney stuffing his pockets with Muffins and pastries at breakfast and loudly announcing “at least I’ve got some lunch for today!”
* Rick’s didgeridoo playing – complete with circular breathing
* The tension in the BBC recording studio!!
* Matthew’s straightened hair
* Allan’s ‘incredibles’
* …I’m sure there’s many more…..