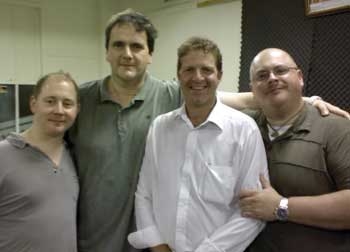 Friends of Dean Morley decided to fly to Australia recently to check to see how their mate was settling in Downunder.

John Barber, who plays Trombone for Fodens, and Stuart Dean, who plays Euphonium for Desford, dropped in to an XLCR rehearsal while in town.

Stuart travelled on to Sydney for the Ern Keller event, where he played baritone with Prestige Brass – a scratch band which ultimaltely won the 2008 Ern Keller Band of the Year