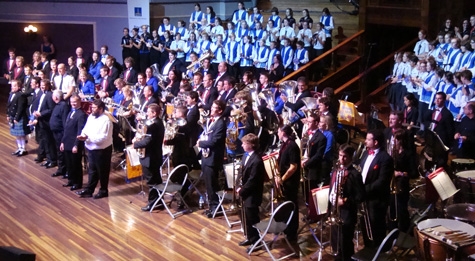 Pam Schryver passed away peacefully in her sleep in the early hours of Tuesday morning, 11 November 2008.

Pam showed incredible strength and determination to attend her tribute concert, Pams Prom Spectacular, to a 1200 strong audience in the Brisbane City Hall on Sunday 9 November.

The Lord Mayoral concert, given to honour Pam’s contribution to the music scene in Brisbane, was an emotionally charged celebration and tribute to a lady who gave so much of herself to the sole purpose of bringing quality music to the Brisbane community.

Pam lost her battle for life due to a rare form of skin cancer, and is survived by her husband Casey, and 2 children Mareika and Peter.

The funeral for Pam Schryver will be held Monday 17 November, commencing at 1100hrs at the Brisbane Salvation Army City Temple, Ann Street, Brisbane.